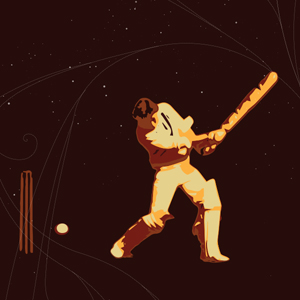 Stafford Brent’s time travel license has been suspended for 6 months while he is being treated for retronausea.

Stafford returned to Oxford more than a dozen times before we made him stop. Each trip made him a little sicker. Each trip brought his youth so near he could almost taste it.

His younger self  grew troubled by the lurking figures — men he thought might be identical triplet brothers. He thought they resembled his uncle. But if he had identical triplet uncles, surely someone would have mentioned it to him. In his present, the cricket season is wet and each splendid play he makes is accompanied by a cheers from three men that do not belong.

He spotted these men — these triplets — peering out from behind the trees surrounding the pitch, the corner of the field-house, or once, on top of the clock tower with binoculars. He’s seen three of them at once, on different corners of the field. Triplets. He can’t imagine there are more, but in fact there were five Stafford’s lurking about at one point, craving one more moment of the glory of his/their youth.

On a date with beautiful South American girl named Alicia, the young Stafford felt like he had been followed. Every happy moment is soured by these men who insist on watching him. These uncles of his are not nearly as clever as they think they are. He can’t enjoy his youth with is older self watching. The older Stafford has blundered into existence a whole new timeline in which his younger self can experience none of the older man’s joy. The very moments the older man keeps popping back to enjoy are ruined. This Stafford will never return to relive his youth, because his youth was spoiled by his own future creepiness leading him to be a better man.