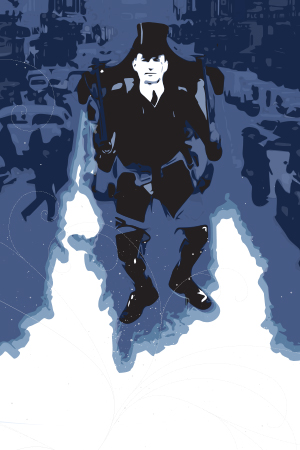 A three year study on the use of jet packs in contiguous, current realities has just been completed by Rass Silvian (Q42) . His findings should come as little surprise to those who have thought through the logistics of jet packs. It will disappoint those with romantic notions of a retro future with people happily whizzing about from place to place via personal jet packs.

In the Y17 and Y18 timelines, jet packs are used with alarming frequency in the streets of most American, European and African cities. Silvian writes: “The timelines at first look charming, like a Steampunk’s dream: all gleaming brass metal and flying men. As you look up to see it, however, you are scalded in the face and pressed to the ground by the thrusters of a passing commuter.”

There is no way around the physical fact that a jet pack must apply equal or greater force than the weight it lifts. Even a petite business woman in a sleek, lightweight transport will surge over the ground with a hundred pounds of hot, steaming pressure.

A little observation reveals that all these cities are deeply stratified. “The wealthy whirl through the air, enjoying a full three dimensions of freedom, while the poor are left cowering and parboiled in the streets.”

Silvian observes 18 cataloged timelines in which jet packs are used as a frequent method of transport. All have highly caste-like social structures and all reserve the privilege of jet pack flight for the affluent elite. The wealthy in these timelines (and many more) simply don’t care what happens to the people beneath them. One be-monocled gentleman even made a game of making beggars scramble beneath him as he enjoyed an egg sandwich and jetted across Plottsdam Park in London.

He writes: “It is as if the adoption of this method of travel, with its promise of independence and personal freedom, has lead to a complete lack of empathy, or consideration for the welfare of the greater society. Either that, or the cruelty of the jet pack has made these sociopathic tendencies manifest in the streets of this world.”

Silvian goes on to note that the wider environmental impacts of jet packs are devastating, with extremely high Co2 emissions and ozone depletion. He also notes that 8 of the visited realities are divergents from a Nazi-centric timeline (Y17:NOA1946:51) where Germany won the Second World War. “The callous use of jet packs,” he says, “are a perfect symbol of the modern Nazi, allowing him to travel in a style that reflects his egocentric need to exert superiority, while maintaining his classic Nazi banality in the face of his own cruelty.”

Silvian suggests explorers of these “Jet Pack Timelines” are best advised to approach with caution and a heat dissipating umbrella.